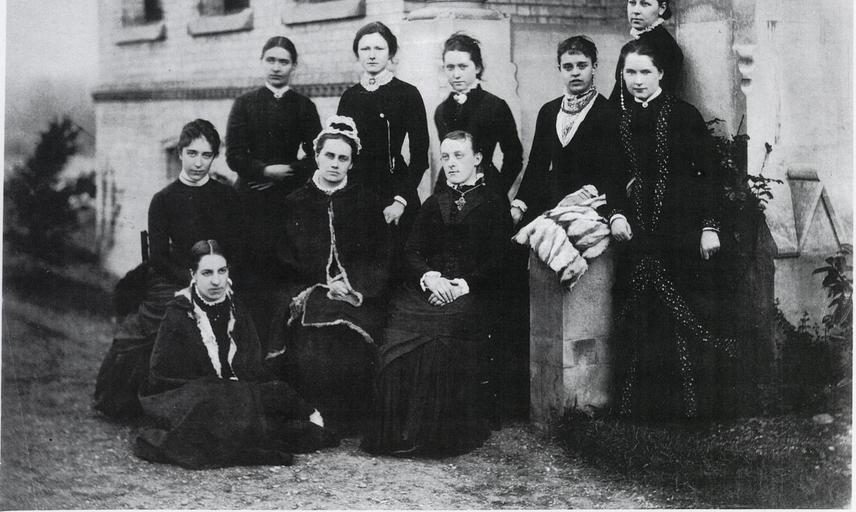 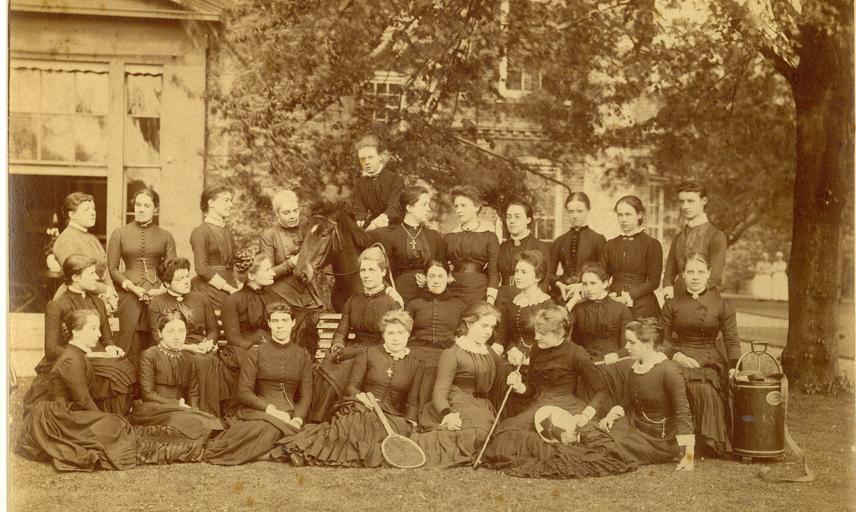 Somerville Hall and The Society of Oxford Home-Students (later St Anne’s) were formed. LMH and Somerville received their first students
1886 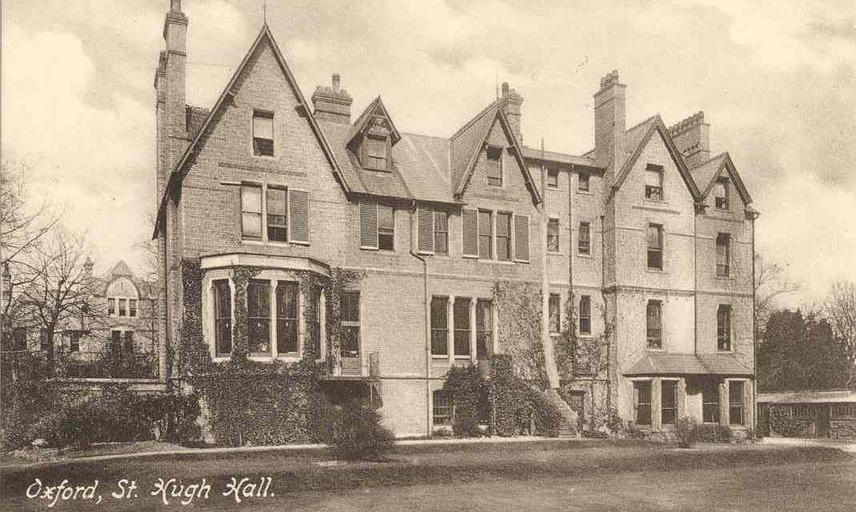 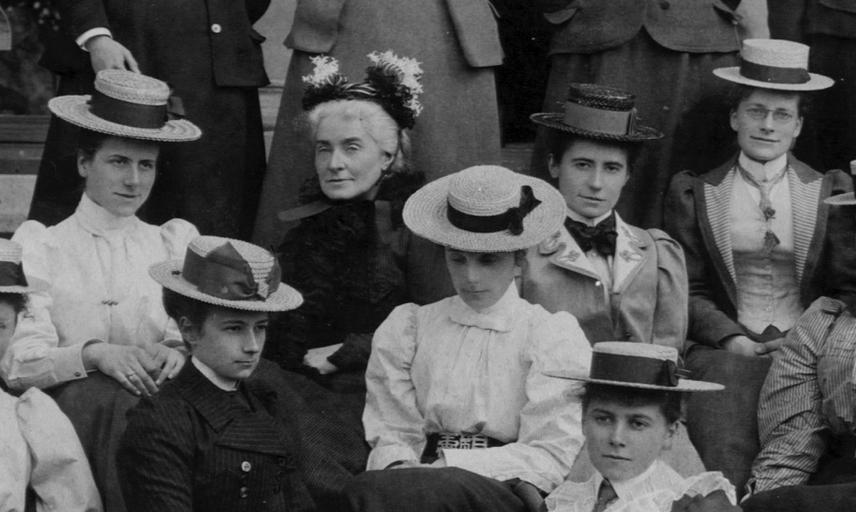 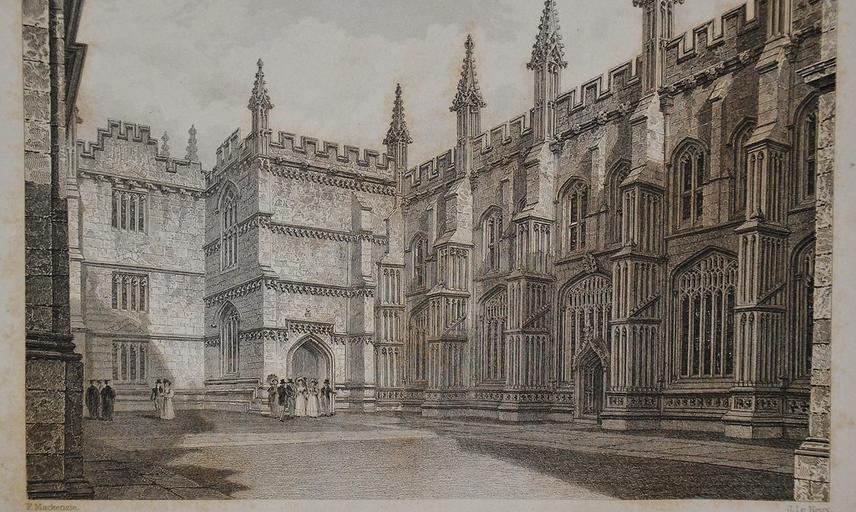 Debating degrees for women, petitions to the Hebdomadal Council and resolutions to Congregation
1896 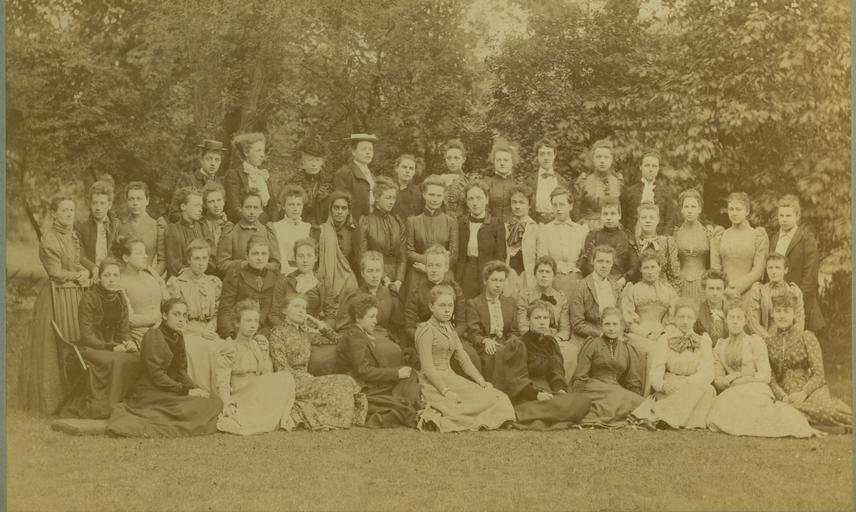 The AEW and Somerville College award BA diplomas to women
1904 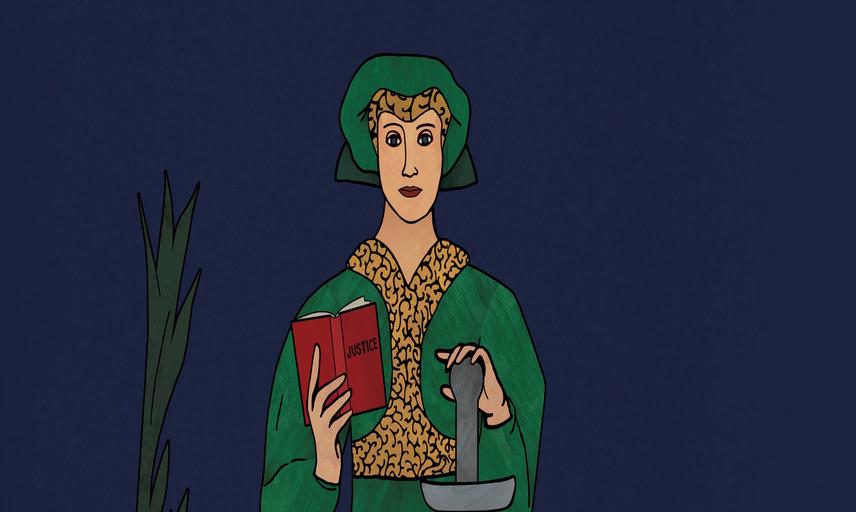 The Delegacy for Women Students was established
1911 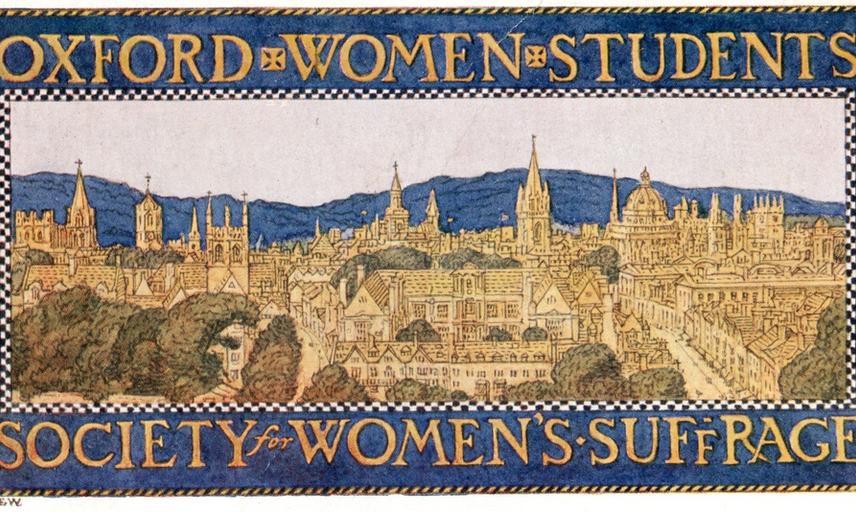 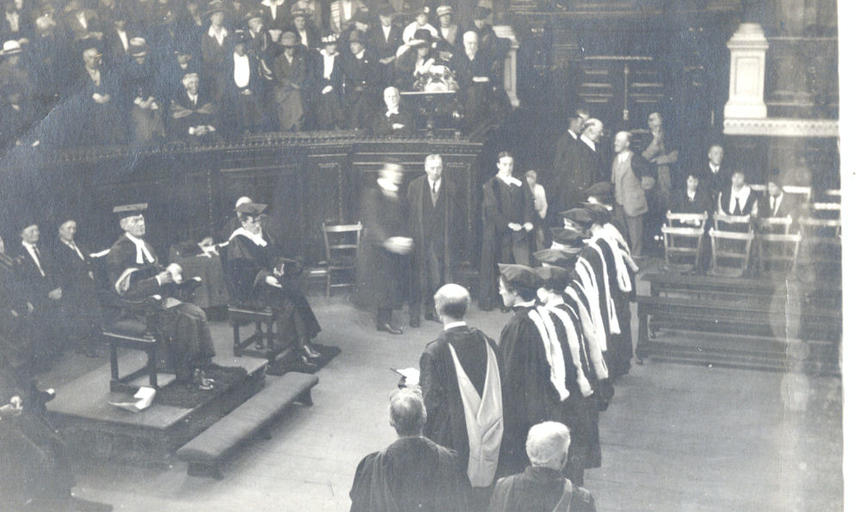 1865 - Cambridge opened school examinations to girls for a trial period. The scheme was made permanent in 1867.

1866 - Eleanor Smith, trustee of Bedford College and sister of a professor at Balliol, organised classes and lectures for women in Oxford. These ceased due to lack of support.

1867 - Anne Jemima Clough formed the North of England Council for the Promotion of the Higher Education of Women.

1869 - Hitchin College Cambridge opened with five students. By 1873, the college moved to new premises in the Cambridge village of Girton. The College was renamed Girton College in 1873.

1870 - After girls were refused admission to the University Local Examinations in 1862 and again in 1866, Oxford opened local examinations to schoolgirls.

- While the restrictions on marriage for College Fellows varied from one College to another, by the 1870s men were frequently permitted to marry.

1871 - The University Test Act was passed, allowing any man to study for a degree (except theology) or to hold a university post without declaring any religious belief or allegiance to any specific church or denomination.

1873 - Mary Ward, Mrs Muller, Louise Creighton and a committee of dons’ wives and sisters launched a new scheme of ‘Lectures for Ladies’. Taking advantage of family and social contacts, they secured the services of a number of progressive and influential University men who agreed to give lectures on Literature, Mathematics, German and History. Professor Arthur Johnson gave the first lecture in the series to a crowded auditorium.

1875 - A new set of examinations ‘for women over eighteen’ was created. These were similar to the Cambridge higher local examinations. 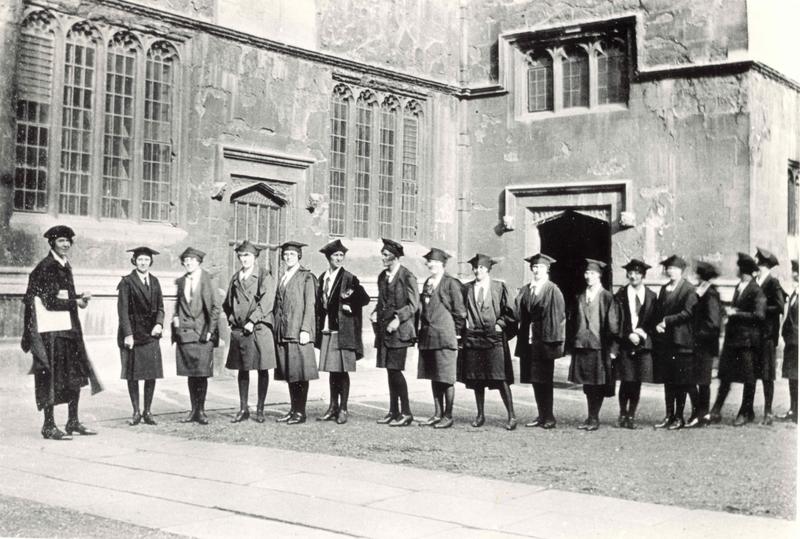 1878 - The Association for Promoting the Higher Education of Women in Oxford (AEW) was established.

- The University of London became the first British University to admit women to its degrees (with the exception of medicine).

- The Society of Oxford Home-Students (the predecessor of St Anne’s College) was established to cater for women students not resident in a women’s Hall.

1882 - Lilla Haigh became Somerville Hall’s and the University of Oxford’s first resident woman Tutor. She was a Tutor in History.

1884 - The Hebdomadal Council accepted a signed petition from the AEW to ‘lay before the University some scheme by which women may be admitted to some, at least, of men’s Honour Examinations’, and gave notice of a statute to be promulgated that would allow the Delegacy of Local Examinations to open honour moderations in Classics, Maths, Natural Science and Modern History to women. The statue was passed by Convocation on 29 April, 1884. Within 10 years, women could take examinations in Arts, Music, Theology and Oriental Studies.

- Forty-one college lectures were by now open to women.

1887 - The AEW established a teacher-training scheme for women.

1889 - Madeleine Shaw Lefevre resigned as Principal of Somerville and was succeeded by Agnes Maitland.

- Cornelia Sorabji became the first Indian woman to attend the University, and the first woman to study law.

1893 - St Hilda’s Hall was founded with Dorothea Beale, who became its first Principal.

- The AEW appointed a Committee for Home-Students, with Bertha Johnson as its Principal (a role she had practically performed for ten years by 1893).

1894 - Women students could by now take all of the examinations that led to a BA degree, but they remained ineligible for the degree.

-The Fritillary was founded as a termly magazine of the Oxford women’s colleges/halls/societies.

1895 - Oxford and Cambridge were the only British universities to exclude women from their degrees from this year.

- Matilda Nettleship donated her late husband’s books to the AEW as a shared library for all women students. The Nettleship Library was housed in the AEW office in the attics of the Clarendon Building.

- The Bertha Johnson Loan Fund was established to assist poor women students. The Fund was administered by the AEW.

1896 - Degrees for women were formally proposed. Congregation rejected a resolution for opening the BA degree to women. It was defeated by 240 votes to 140. A further four resolutions were opposed.

- The AEW issued its own BA Diplomas to women who took a full degree course.

- St Hilda’s Hall was officially accepted by the AEW.

1898 - The Society of Oxford Home-Students was officially accepted by the AEW.

1906 - All Oxford colleges had opened lectures to women by1906, but individual lecturers could still exclude women if they wished to.

1907 - The Vatican gave approval for Roman Catholic women to study at Oxford.

- Agnes Maitland died and was succeeded by Emily Penrose as Principal of Somerville.

1908 - The first entrance examination for women was introduced at Somerville.

- Suffrage societies were formed at LMH and St Hugh’s.

1909 - The Society of Oxford Women Tutors was formed.

1910 - The Delegacy for Women Students was set up and women were officially recognised as resident students by the University.

- Somerville became the first women’s college to attract an endowment for research. It received funding for the Carlisle Fellowship (a research fellowship tenable for 5 years).

1914 - All women were allowed to attend lectures unchaperoned.

1915 - The first women were invited to lecture at the University.

1916 - The Bachelor of Medicine degree was opened to women

- The women’s college Principals, Emily Penrose, Henrietta Jex Blake, Eleanor Jourdain, Winifred Moberly and Bertha Johnson, were the first women to have the degree of MA conferred on them by Convocation on 14 October 1920. 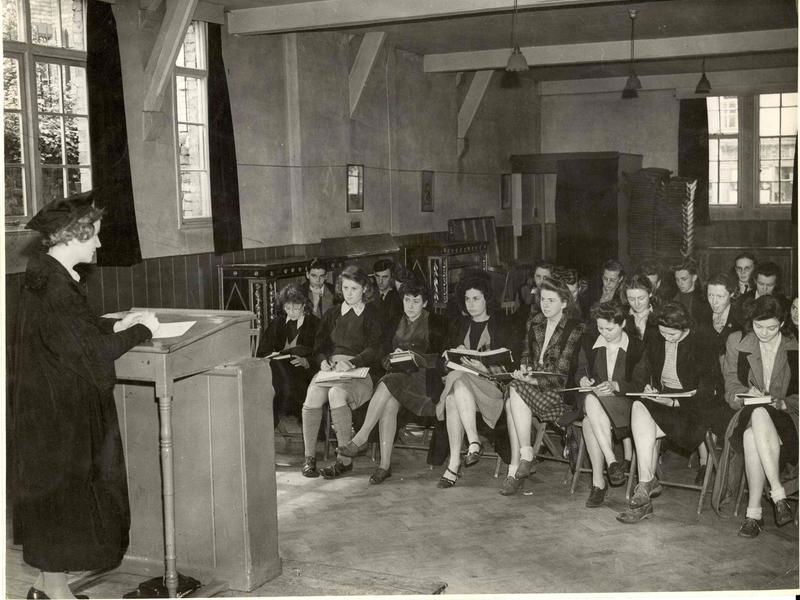 1922 - Dr Evelyn Simpson, graduate and former Tutor of St Hugh’s College, became the first woman to be awarded a DPhil.

- Lucy Sutherland became the first woman student to speak at the Oxford Union.

1927 - The University of Oxford imposed quotas to limit the number of women admitted to the University to no more than 840.

1929 - Dorothy Maud Wrinch became the first woman to receive an Oxford DSc (Doctor of Science) from the University.

1942 - The Society of Home-Students became the St Anne’s Society.

1946 - Ophthalmologist, Ida Mann, became the first female Professor at the University of Oxford.

1948 - The quota restricting the number of women at the University of Oxford was raised from 840 to 970.

1957 - The quota limiting the number of women undergraduates to a quarter of men was removed.

1959 - The five women’s colleges received the ‘full status’ which was given to men’s colleges. After this date, their heads became eligible to become Vice-Chancellor of the University.

1961 - The Principal of LMH, Lucy Sutherland, became the first woman Pro-Vice Chancellor of the University of Oxford.

- Dr Anne Whiteman was elected as the first representative of the women’s colleges to the Hebdomadal Council.

- Women were admitted to full debating membership of the Oxford Union.

1963 - St Anne’s College became the first college with its own nursery.

1973 - Balliol College became the first men’s college to elect a woman Fellow when Carol Clark took up her Fellowship in Modern Languages.

1979 - LMH and St Anne’s became the first of the former women’s colleges to become co-educational. They admitted male students from Michaelmas Term, 1979.

1985 - Ruth Deech (later Principal of St Anne’s College) became the first woman to serve as Senior Proctor for the University.

1986 - Professor Marilyn Butler became the first female head of a formerly all-male college at either Oxford or Cambridge.

1994 - Somerville College began to admit men, despite immense opposition from the JCR.

2008 - St Hilda’s College became the last of the women’s colleges to admit men.

2016 - Professor Louise Richardson became the first woman in the University of Oxford’s history to become Vice-Chancellor.

2019 - Alice Oswald became the first female Professor of Poetry since the foundation of the post in 1708.

2020 - Baroness Valarie Amos is the first black woman to become head of any Oxford college, and the first woman Master of University College.