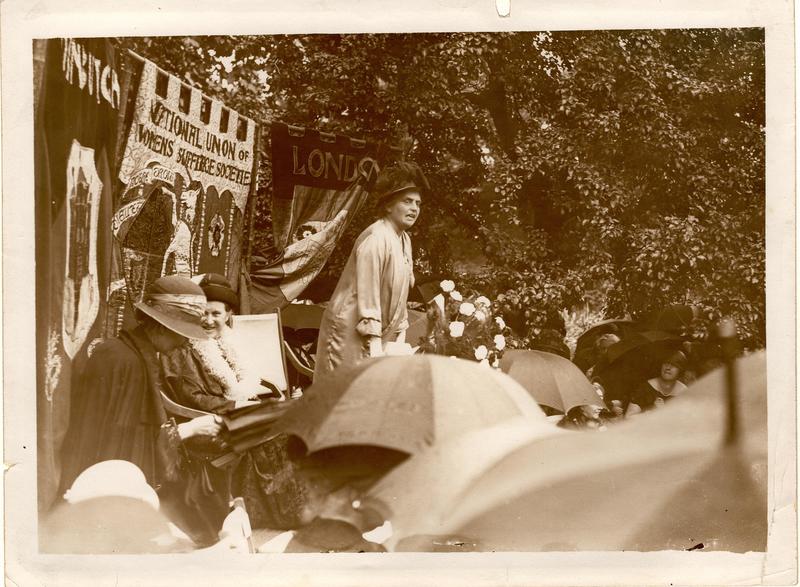 In 1904, the Oxford Women’s Suffrage Society (OWSS) was founded. The OWSS was open to men and women and from the outset had strong connections with the University. Its first public meeting was held at Somerville which, in common with the other women’s colleges, fostered a strong feminist culture.

Meetings were held at a variety of venues, depending on whether they were open to the public or restricted to members. These included Somerville, St Hilda’s, St Hugh’s, Manchester, and public spaces including the Town Hall. The OWSS was affiliated to the non-militant National Union of Women’s Suffrage Societies (NUWSS) and conducted a campaign of constitutional activism. This included ‘at homes’, public meetings, and contributing to the local and national press. It attracted many prominent speakers including Millicent Fawcett, president of the NUWSS. A number of prominent suffrage families frequently hosted meetings and events in their homes. These included: the Rhys family whose home in Jesus College, where John Rhys was Principal, became a centre of suffrage activism; Winshields in Headington, the home of St Hugh’s Maths tutor Winifred Haverfield and her husband Francis, Camden Professor of Ancient History; and 88 Woodstock Rd, the home of Jessie Margoliouth and her husband, David, the Laudian Professor of Arabic.

From 1911, the Oxford Society had an office in Holywell Street which served as a venue for meetings as well as a small suffrage shop and library. It was raided by a male undergraduate in 1913. The OWSS continued to grow and in 1910 joined the newly-formed Oxon, Berks and Bucks Federation of the NUWSS.